Notes on the design and construction of a (relatively) cheap wind tunnel for the Daniel Lab.

I designed the Daniel Lab's wind tunnel as a virtual model in 3D CAD software (Google SketchUp: http://sketchup.google.com). Such a model was very useful for exploring and testing various design options before any actual structure was ever built. In addition, creating a parts list from the 1:1 model greatly simplified the ordering process. The wind tunnel design consists of three separable, but tightly attached, sections. 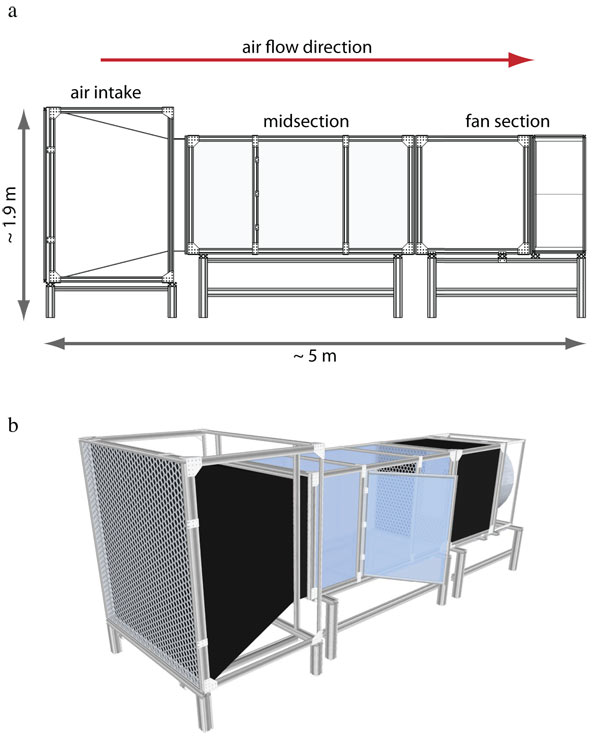 The walls of the mid-section, which have to allow an undistorted view of the inside, as well as IR and visible illumination from the outside, are of clear, high-quality acrylic sheets of 6 mm thickness. Sections that don't require a view of their inside volume are walled with black Sintra PVC, also 6mm thick. (Sintra is lightweight, yet rigid, expanded polyvinyl chloride (PVC) extrusion.)

The following image shows the wind speed measured at 9 different locations with an anemometer. The right side, looking upwind, experiences slightly lower velocities because of the proximity of a wall to the intake. The wind tunnel has just moved to a new room, where such wall effects will be far less important. 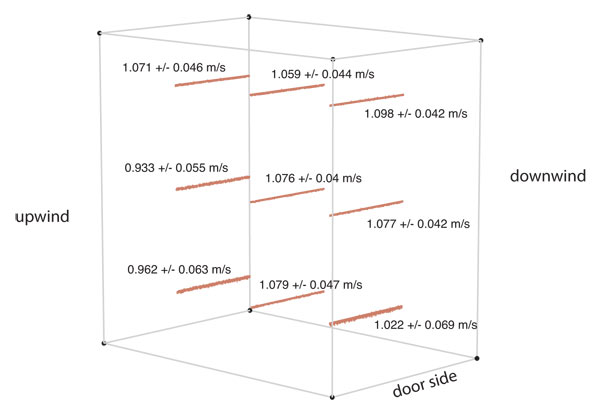 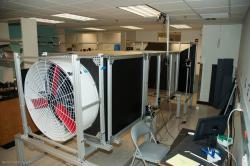 Wind tunnel at its new location 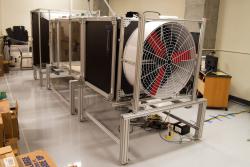 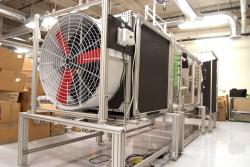 Thanks for the post. I was wondering if you know about any article or published research that uses this wind tunnel? Could you may be provide the title of such an article? I am interested in reading more about the tunnel.

Thanks Armin for the information. I am interested in knowing the turbulence levels in the wind tunnel. However, I couldn't find such information in the research articles using this (or a similar) wind tunnel. Do you know, may be, the approximate turbulence levels that exist in these kind of tunnels or a source where I can find such information? Also, if I understand the last figure on this webpage correctly, it shows the variation within upstream and downstream rather than at individual points, isn't it? I really appreciate you taking time to answer my questions!

The last figure shows air speed measurements done with a quick-to-react hot-wire anemometer at 9 different points in the mid-section of this wind tunnel. The red lines show the air speed over a period of time (a bit confusingly), sampled at a fairly high frequency. I know someone at some point measured air speeds along, as well as across, at multiple points, but I don't know if this info ever made it into any publications. The goal was to get as even a flow at

This already then provides information about the turbulence levels (assuming, of course, sampling rate was adequate) as the variation in the last figure is with time and not in space. Thanks for clearing that up!

The sample rate was a few kHz, and thus faster than the response time of the anemometer. (It was a fast-responding one, but I can't remember the details.) The +/- values at each spot give you the standard deviation of the wind speed measured over a few seconds.

currently i design a open blower wind tunnel by myself and i would like to know
how did you attach the honeycomb core to the aluminium frame?
Do you have any detailed pictures of the attachement?

Hi Phil, The pre-cut honeycomb panel just fit into the 80/20 frame really well. It was slid in place and then prevented from sliding back out by attaching some small brackets to the frame. (The honeycomb holder panel depth was matched to that of the honeycomb itself.) I'll try and find a picture of it somewhere...

Hey Armin, thanks for your response and your effort!