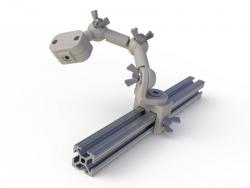 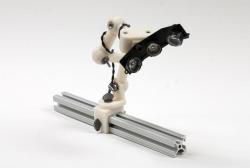 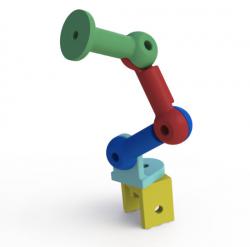 A modular system of interlocking pieces for holding small gadgets in place. Printed on the Daniel Lab's uPrint 3D Printer to fit a multitude of holding tasks. Standard 1/4-20 screws can be used to fasten together individual pieces. (Fall 2009 - 2010)

It's pretty common that I have to position small items such as light sources or electronics somewhere in my setup when conducting experiments. A lot of times, duct tape is the perfect quick fix. It's really hard to adjust the angle of a light source that's taped to a rod, though. And so I thought it would be nice to have a flexible, modular system with many degrees of freedom for holding small parts in place. My experimental rig uses 80/20 aluminum extrusions for framing, and therefore I wanted a system that can easily be attached to the frame as well.

Initially I designed such a modular holding system in Google Sketchup, with the idea that the finished pieces can be printed on the lab's 3D printer (Dimension uPrint). I've since redesigned them in Solidworks, which makes creating STL files for 3D printing much easier and more precise. Since I work on moths, and the parts looked like bones, I called them "MothBones".

As the renderings on the right show, the pieces can be attached to each other in a variety of ways. Hex-nuts are press-fit into a slot at one end of each piece. This creates a strong thread for a 1/4-20 wing-screw that attaches the complementary piece to it. The second concept rendering shows these screws, as well as the attachment to the 80/20 aluminum base, and the ballhead unit.

Please download the zipped STL files for all components from the "file attachment" link near the bottom of the page.